The French Film Festival returns for its 24th edition in the Philippines this June and July with a line-up of 15 contemporary French films that explore the depths of human relationships and the importance of family. 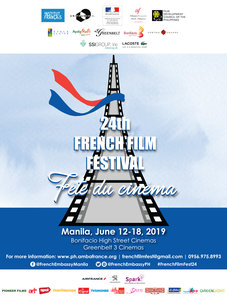 The French Film Festival rolls out in Metro Manila from June 12 to 18 at the Greenbelt 3 cinemas and the Bonifacio High Street cinemas.

This year, French director Nils Tavernier graces the red carpet in Manila to formally open the 24th French Film Festival with the screening of his latest film, “L’Incroyable histoire du Facteur Cheval” (“The Ideal Palace”). Set in Southern France in 1879, the film recounts the true story of an ordinary mailman who devotes 33 years of his life to build a castle for his daughter. This “Ideal Palace” located in France’s Auvergne-Rhône-Alpes region was named a Historical Monument by the French government in 1969.

In line with France’s commitment to the defense of women’s rights all over the world, the French Embassy and SPARK! Philippines will jointly organize a special screening of “Bande de filles” (“Girlhood”) followed by a forum on June 14 to explore and encourage dialogue on issues faced by young girls in France and in the Philippines.

Pepe Diokno’s “Above the Clouds,” which was co-produced with funding from the Aide aux Cinémas du Monde program of Institut Français;

In honor of the National Artist for Film and Mass Communications Kidlat Tahimik’s “Mababangong Bangungot” (“Perfumed Nightmare”) which was partly filmed in Paris.

After Manila, the Festival will organize screenings in the following cities:

In Manila, tickets for each screening are priced at PHP 150 to cover the operational costs of the cinema and may be purchased at the box office or through www.sureseats.com. Screenings are free of charge in Cebu, Davao, and Bacolod.

Synopsis: South of France, 1879. Ferdinand Cheval is a reserved and quiet man. A rural mail carrier, he enjoys the loneliness of his 20 mile rounds while daydreaming about a world full of wonder and beauty he sees only through postcards and magazines. After the birth of Alice, his daughter, he has a revelation: to build her a castle to make her a princess. He builds with no architectural background, driven only by his love for Alice, the unconditional support of his wife, Philomène, and his vision.

Synopsis: Like all teenagers, Julien dreams of adventure and thrilling sensations. But when you live in a wheelchair, such dreams are difficult to fulfill. To do so, Julien challenges his father to compete with him in the "Ironman" triathlon in Nice, one of the most difficult sporting events in the world. A whole family comes together and reconnects in an attempt to see this incredible exploit through.

Synopsis: A group of 40-something guys, all on the verge of a mid-life crisis, decide to form their local pool’s first ever synchronized swimming team – for men. Braving the skepticism and ridicule of those around them, and trained by a fallen champion trying to pull herself together, the group sets out on an unlikely adventure and, on the way, will rediscover a little self-esteem and a lot about themselves and each other.

Synopsis: For 16 year old Marième, life is like a succession of prohibitions – the censorship in the neighborhood, boys ruling the roost, school’s dead end... But her encounter with three liberated girls changes everything. They dance, fight back, talk loudly, laugh at everything. Marième meets Vic and joins the gang, to make the most of her youth.

Synopsis: From his difficult childhood in Poland and his adolescence beneath the sun of Nice, to his adventures as a pilot in Africa during the Second World War, Romain Gary lived an extraordinary life. But Gary owed his fury for a thousand different lives, to become a great man and a famous writer, to his mother, Nina. It was the crazy love of this endearing and eccentric mother that will make him one of the most important novelists of the twentieth century with a life full of twists and turns, passions, and mysteries. But this boundless maternal love will also be his burden throughout his life.

Synopsis: Victoria Spick, a criminal defense attorney on the verge of an emotional breakdown, goes to a wedding where she runs into her old friend, Vincent, and Sam, a one-time dealer she had successfully represented. The next day, Vincent is accused by his girlfriend of attempted murder. The only witness is the victim’s dog. Victoria reluctantly agrees to defend him, and at the same time, hires Sam as her nanny. Her life is about to take a devastating turn.

Synopsis: Neïla Salah grew up in Creteil and dreamed of becoming a lawyer. On her first day at the renowned Assas Law School in Paris, she runs up against Pierre Mazard, a professor known for his provocative behavior and misconduct. To redeem himself, he agrees to prep Neïla for a prestigious public speaking contest. Cynical and demanding, Pierre might become the mentor she needs... But to do that, both of them will have to rise above their prejudices.

Synopsis: Etienne comes to Paris to study filmmaking at the Sorbonne. He meets Mathias and Jean-Noël who share his passion for film. But as they spend the year studying, they have to face challenges in friendship and love, as well as choosing their artistic battles.

Synopsis: Mathieu will stop at nothing to get his 11 year old daughter Sarah out of the hermetic chamber she has been living in since she was born. Suddenly, an earthquake hits Paris. A deadly fog seeps out of the earth. Mathieu and Sarah’s mother, Anna, are among the few survivors who find refuge on the rooftops, but they have to leave Sarah in her bubble to escape. Mathieu and Anna count the time left on the batteries that power Sarah’s bubble. How can they replace them before they run out and leave her unprotected from the spreading danger?

Synopsis: An actress will play Barbara, the French singer. The shoot will soon start. The actress works on her character, her voice, the songs, scores, the gestures, knitting, scenes she has to learn… Things are going okay, there’s progress, development, she is even overwhelmed. The film director also works, through his encounters, through archives, music, he lets himself be submerged, overwhelmed like the actress, by the actress.

Synopsis: Miriam and Antoine Besson have divorced, and Miriam is seeking sole custody of their son, Julien, to protect him from a father she claims is violent. Antoine pleads his case as a scorned dad and the appointed judge rules in favor of joint custody. A hostage to the escalating conflict between his parents, Julien is pushed to the edge to prevent the worst from happening.

Synopsis: By a little bay near Marseille lies a picturesque villa owned by an old man. His three children have gathered by his side for his last days. It’s time for them to weigh up what they have inherited of their father’s ideals and the community spirit he created in this magical place. The arrival, at a nearby cove, of a group of boat people will throw these moments of reflection into turmoil.

Synopsis: Whoever thinks that the countryside is calm and peaceful is mistaken. In it, we find especially agitated animals, a Fox that thinks it’s a chicken, a Rabbit that acts like a stork, and a Duck who wants to replace Father Christmas. If you want to take a vacation, keep driving past this place...

Synopsis: Mrs. Géquil is an eccentric teacher despised by her colleagues and students. On a stormy night, she is struck by lightning and faints. When she wakes up, she feels decidedly different… Now will Mrs. Géquil be able to keep the powerful and dangerous Mrs. Hyde contained?

Synopsis: An unpredictable documentary from a fascinating storyteller, Agnès Varda’s next film sheds light on her experience as a director, bringing a personal insight to what she calls “cine-writing”, traveling from Rue Daguerre in Paris to Los Angeles and Beijing. 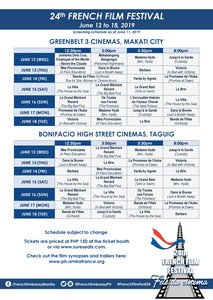 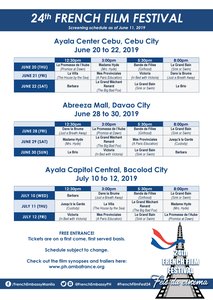 The 24th French Film Festival in the Philippines is organized by the Embassy of France to the Philippines, Institut Français, UniFrance, the Alliance Française de Manille, and the Film Development Council of the Philippines, in cooperation with the Ayala Malls Cinemas, the SSI Group, Inc., and Central Square, and with the support of Lacoste, Peugeot Philippines, Air France, SPARK! Philippines, Pioneer Films, Cignal, TV5Monde, TeamApp, Greenlight, Bizu, Don Papa, Le Cellier, and media partners Art Plus Magazine, Manilascope, and Spot.ph.