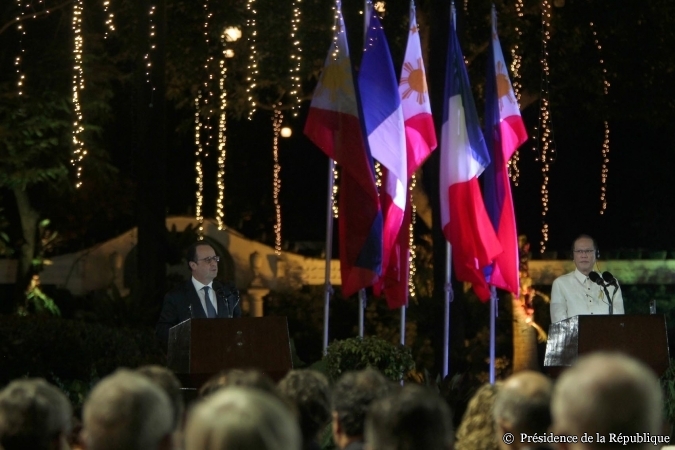 Our Manila Call to Action on Climate Change represents solidarity in action. We are hopeful that this joint call will help us gain momentum for a truly global initiative to address climate change. I extend my gratitude to President Hollande and the Republic of France, along with all nations of good will who have pledged action to address this global threat.

Over the past few years, the Philippines has found itself at the forefront of this issue. The impact of climate change on our people has been massive. For instance, the Christmas season is normally one of the most joyous portions of the year for us, and given the fact that we have over ten million Filipinos overseas, there are plenty of family reunions during this time. Unfortunately, recent years have transformed some of us in government, making us a little less joyous, and a little more tense and apprehensive. It has become a time in which we have to prepare for out of season typhoons that have hit us in increasing frequency. Allow me to explain : The rainy season in the Philippines typically lasts from June to November. However, Tropical Storm Washi in 2011, Typhoon Bopha in 2012, and Typhoon Hagupit in 2014 all made landfall in December. There was also Typhoon Mekkhala, which occurred in January of this year. Of course, this does not even include the storms of increasing magnitude that have hit us during the regular rainy season, such as Typhoons Nari and Haiyan in 2013.

However, there is a truism that we must consider : When you fight Mother Nature, you cannot win. Hence, to address this issue, we must not just deal with the after-effects of climate change, but with its primordial causes. In this light, we, as a developing country, welcome that countries like France have emerged as champions of a global partnership to address this issue.

This statement, thus, is a welcome call to action : No longer can we be paralyzed by debates over the obligations of individual countries ; all of us must do everything we can, in the quickest and most impactful way possible. The choice before us is clear. We can either overcome this problem together, or together reap the consequences of apathy.

For this reason, it is incumbent upon us to conclude a universal climate change agreement in Paris later this year : one that is ambitious ; that is guided by science, and that allows developing countries to pursue their economic goals in the context of sustainable development.

Rest assured that the Philippines will continue to exert its utmost to address this issue, and follow through on the commitments outlined in this call to action. We stand in hope that many nations in the global community will do the same.