The Alliance Francaise de Manille, together with the Embassy of France to the Philippines as well as with other institutional and private sector partners, have prepared a line-up of events to commemorate the celebration of the Francophonie and French language in the Philippines from March 20 to March 28.

There will be a variety of events and activities, such as live performances from French musician/DJ, Charles-Baptiste as our guest star, a photo competition, a singing contest, and film screenings.

Alliance Française de Manille, and the Embassy of France to the Philippines, wish to acknowledge the support of all the partners of the celebration namely, the Embassies of Qatar, Switzerland, Belgium, Canada, and Hungary to the Philippines, the Consulate General of Monaco in the Philippines, SM Supermalls and SM Aura Premier, Qatar Airways, Lane Movers, Y2 Residence Hotel, Aficionado perfumes, La Mère Poulard, Don Papa Rum, 20:20 and Piefke.

The International Organisation of La Francophonie (I.O.F.) represents one of the biggest linguistic zones in the world. Its members share more than just a common language. They also share the humanist values promoted by the French language.

The International Organisation of La Francophonie was created in 1970. Its mission is to embody the active solidarity between its 84 member states and governments (58 members and 26 observers), which together represent over one-third of the United Nations member states and account for a population of over 900 million people, including 274 million French speakers. 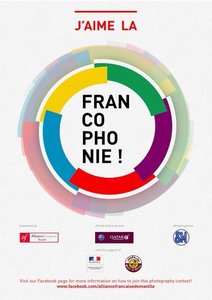 Francophonie lovers of the Philippines, this one is for you!

In celebration of the #Francophonie Month 2018, @alliancefrancaisedemanille invites all Filipinos and Filipinas from the Philippines to join the photo contest called “J’aime la Francophonie” on Facebook.

Entering this competition is easy:

A jury will award the winners on the Francophonie Night, on Thursday, March 22, 2018, at 7pm. This is how to take a chance to WIN A RETURN FLIGHT TICKET TO PARIS (Manila-Paris-Manila) with Qatar Airways, supporting our Francophonie event, as State of Qatar has been a member of Francophonie since the end of 2012.

On Thursday, March 22, 2018, to highlight the Francophonie celebration in the Philippines, join us for the Francophonie Night at the Alliance Française de Manille. This event is open to all and admission is free!

1st half| Apéro will be served

7:30 pm| Introduction of the song competition and Presentation of the 3 groups 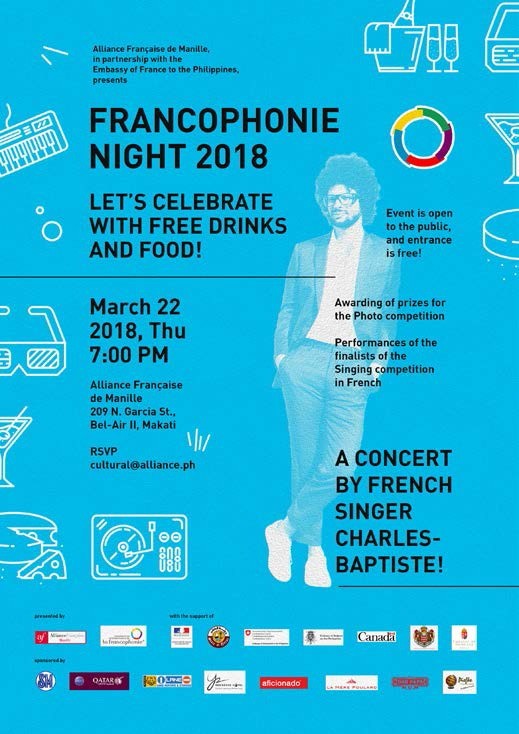 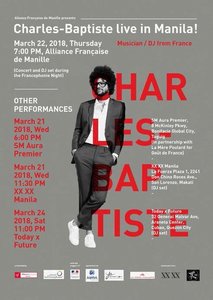 Charles-Baptiste will be the French artist invited to perform in Manila for the Francophonie celebration. His performance is in tradition of bringing French acts in the Philippines during this occasion as part of the worldwide celebration of French language.

With a real stage personality and incredible energy, Charles- Baptiste sprinkled the French variety and takes the opposite of the singers of his generation.

Elated by his first album Les Sentiments Inavouables (Mercury / Universal - 2014) and his famous French adaptation of Daft Punk’s Get Lucky, he grooves to the sound of music with aspiration, making people sing along in chorus with lyrics that speak to all generations.

Wednesday, March 14 at 6:30 pm: A night of Canadian film, cuisine and drinks Les temps changent presented by the Canadian Embassy in Manila (Free admission, RSVP to nfuentes@alliance.ph due to limited seats)

This documentary is presenting a vision of how could be our planet in 2075. Through different stories coming from all around the world, “Les temps changent” deals with ecological, geopolitical and economic issues linked to global warming. Julia in a vineyard in the south of France, Idrid and Faouzi in Mali, Lotte in Hambourg and Grace in Canada are all facing the tough reality of a dry and infertile land.

Wednesday, March 21 at 6:00 pm: A night of Swiss film, cuisine and drinks Ma vie de Courgette / My life as a zucchini presented by the Swiss Embassy in Manila (a private invitation-only event)

BARRAS Claude, 2016, 70 min, France-Switzerland, Comedy drama Zucchini is not a vegetable: he is a brave little boy.

After losing his mother, he feels alone in this vast world. He is sent to a foster home with other orphans of his age. Life is surprising, and it is where he begins to learn the meaning of trust and true love.

Wednesday, March 28 at 6:30 pm: A night of Belgian film, cuisine and drinks Un homme a la mer presented by the Royal Belgian Embassy in Manila (Free admission, RSVP to nfuentes@alliance.ph due to limited seats)

Mathieu is an unhappy marine biologist. He spends his time on his microscope, cutting tiny marine organisms corpses. His true wish would have been being on the sea. But an event will abruptly change his life : Christine, his mother in law, runs away. Attracted by this impulsion, and curious to understand her, Mathieu starts looking for her. He’s going to find her in a house by the sea and will share the same desire of regaining control of his life.