18 chefs from the Philippines have been selected to join 3,000 others to join the 4th edition of Goût de France / Good France – the biggest dinner in the world to celebrate French gastronomy!

Launched in 2015 by the French Ministry of Foreign Affairs and by celebrated French chef Alain Ducasse, Goût de France / Good France is an annual event organized by French diplomatic missions in their host countries as a tribute to the excellence of French cuisine and its capacity to innovate and unite people around the common values of sharing and enjoyment in an environmentally-friendly and healthy way. 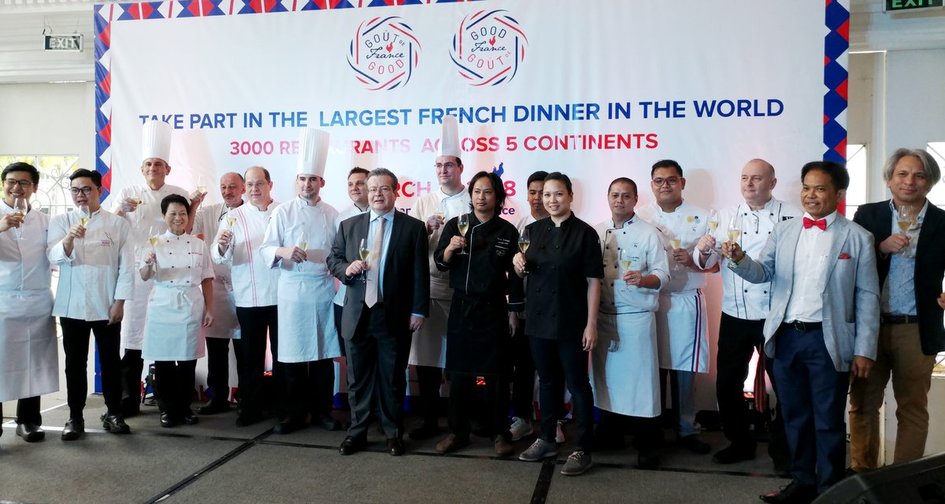 The concept is inspired by Auguste Escoffier’s “Epicurean Dinners”: to serve the same menu, on the same day, in several cities, for as many guests as possible.

"French cuisine is listed among UNESCO’s Intangible Cultural Heritage and as such, it belongs to everybody, and we want to give as many people as possible in the Philippines the chance to taste and enjoy it," said French Ambassador Nicolas Galey.

An international committee of chefs led by Alain Ducasse has selected chefs from all over the world, including the Philippines, to cook a French dinner to be served in their respective establishments on March 21, 2018. These proposed menus must follow the sequence of a traditional French meal (aperitif with finger food, starter, 1 or 2 main courses, cheese platter, and dessert), accompanied by French wines and spirits. Chefs are also encouraged to use local ingredients.

Goût de France in the Philippines

The number of participating chefs in the Philippines continues to grow. From 6 chefs in 2015, 18 chefs will now be preparing a special French dinner for the public on the occasion of Goût de France on March 21, 2018:

"As many people, Filipinos can be intimidated by French food. It is often perceived as classy, or complicated, or elitist, and inevitably, costly. As if French people’s everyday meals were made only of sophisticated, expensive cuisine that is difficult to make, as if everyone in France had to spend hours and a fortune each day to prepare his or her lunch or dinner. Of course, it is not the case. Daily food can be easy to make, simple, light, affordable but tasty, varied and surprising," Ambassador Galey explained.

A special private dinner will also be hosted by the French Ambassador at his residence on the occasion of Goût de France in the evening of March 21. Chef Miko Calo, who trained under acclaimed French chef Joël Robuchon, has been invited to offer a special menu prepared with native Filipino ingredients. Guests will also be serenaded by Kate Torralba with a repertoire of French and Cebuano standards.

French cuisine draws in the tourists

2017 saw France make a significant comeback as an attractive tourist destination. Nearly 89 million international tourists visited France (up by 5% from 2016), making 2017 a record-breaking year for French tourism. With a third of tourists coming to France for its culinary heritage, French gastronomy has become one of the key drivers of France’s attractiveness and cultural outreach.

The wealth of France’s cuisine and the inclusion of the “Gastronomic Meal of the French” on the UNESCO List of Intangible Cultural Heritage in 2010 make France a unique destination that offers a wide variety of ever-changing gastronomic experiences.

For the list of participating Goût de France restaurants and their menus, visit http://restaurateurs.goodfrance.com/en/participating-restaurants

To know more about the menus to be served and to make a reservation, please directly contact the participating Goût de France / Good France restaurants in the Philippines.