The Embassy of France to the Philippines and the Alliance Française de Manille present the ninth edition of Les Jeudis culturels (Cultural Thursdays) on September 12, 2019, 7:00pm at the AFM Multipurpose Hall with a creole jazz concert featuring French singer Tricia Evy, accompanied on the piano by David Fackeure. 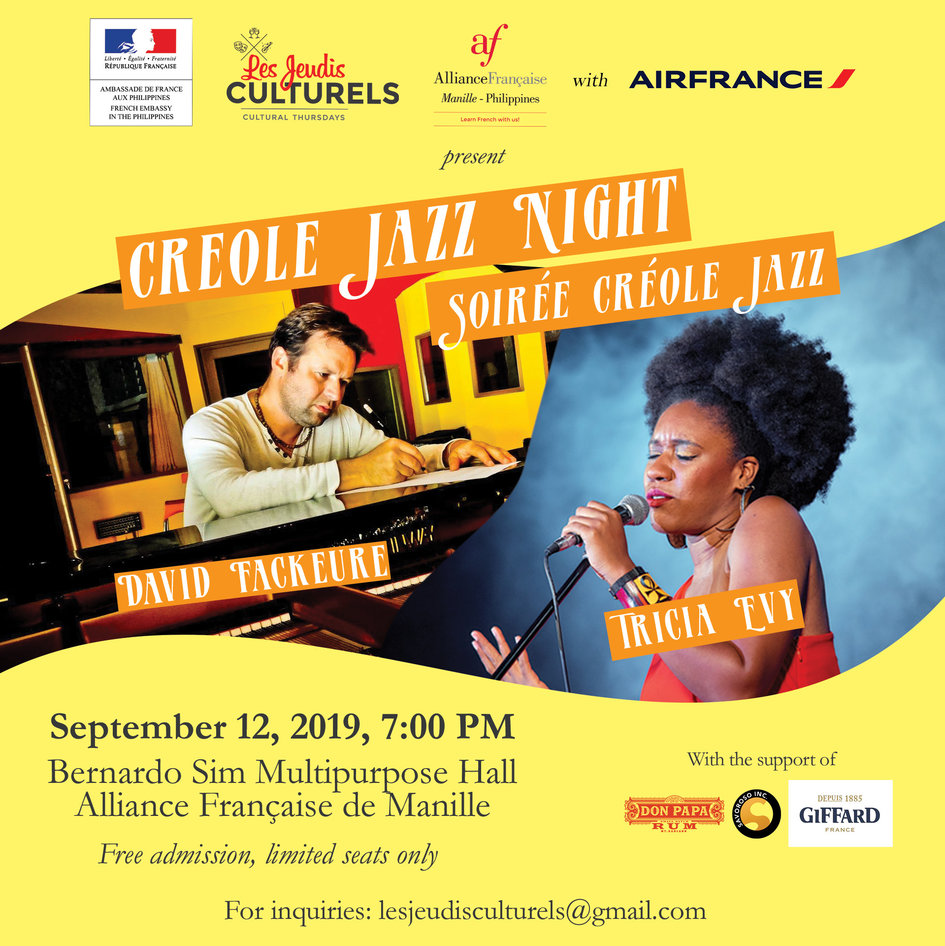 Raised in Guadeloupe in the French Caribbean, Tricia Evy grew up learning the classics of Ella Fitzgerald, Billie Holiday, Louis Armstrong, Stan Getz, and Mel Tormé. She recorded two albums in 2010 and 2013, collaborating with pianist David Fackeure, bassist Thierry Fanfant and drummer Francis Arnaud on a repertoire of standards and personal compositions, as well as musical pieces inspired by the cultural heritage of the Antilles Islands. Her third album, “Usawa” (2018), marks the maturity of her music following years of performing in jazz festivals in Africa, Australia, Europe, and Latin America.

A jazz artist in his own right, David Fackeure is a pianist specializing in biguine, a musical style originating from Guadeloupe and Martinique. He studied harmony at the Bill Evans Academy, which he later integrated in his improvisations. He has recorded three albums: “Jazz on Biguine” (2000 and 2007) and “La Sérénade du Muguet” (2009).

Since their first encounter at the Duc de Lombards in Paris in 2009, they have been performing together and have been collaborating on various projects, including the jazz album “Meet Me,” which was released in 2012.

This event is free and open to the public! Limited seats only.

Registration is a must : https://www.eventbrite.fr/e/billets-les-jeudis-culturels-creole-jazz-night-at-the-afm-71013349841.

After Manila, Tricia Evy and David Fackeure will perform at the Ayala Center Cebu on Saturday, September 14, 2019. For more information, contact the Alliance Française de Cebu through their website www.alliancefr.ph.

Les Jeudis culturels (Cultural Thursdays) was launched in 2018 by the Embassy of France to the Philippines and the Alliance Française de Manille as a monthly cultural rendez-vous to promote contemporary French art and provide a platform for cultural collaborations between artists through music, theater, dance, poetry, gastronomy, and other art forms.