The signing of a French-Philippine framework agreement on higher education and research by the foreign affairs ministers of France and the Philippines are among the most significant bilateral developments resulting from the state visit of French President François Hollande to the Philippines in February 2015. This agreement provided the backdrop to emphasise the importance that both countries attribute to the development of their cooperation in the area of higher education, with a particular focus on public governance and sustainable development. The need to increase student flows between the two countries was underscored as well.

The first pillar rests on the close relations cultivated by the French Embassy with the country’s two most prestigious universities. Students from the Ateneo de Manila University and the University of the Philippines-Diliman comprise 75% of all Filipinos leaving to pursue their studies in France.

The second pillar is based on the engagement of Campus France, which established its office in Manila in 2008. Campus France ensures the promotion of French higher education, interacts with students across the country, and provides assistance to anyone considering or preparing to undertake studies in France.

The third and final pillar is founded on the excellent relations forged with the Commission on Higher Education (CHED) of the Philippines, through which a variety of projects has been made possible. This led to the organisation of a France-Philippines University Forum in June 2016. The forum, which was opened by the chairperson of the CHED and the French and Philippine ambassadors, aimed to support the implementation of interuniversity partnership agreements, 60 of which are already existing. The visit of a Philippine ministerial delegation to Paris was also organised in the same context, while a reciprocal event in Paris is scheduled for 2017 to promote Philippine higher education among French universities and higher education institutions. A Philippines discovery camp, free-of-charge for students receiving a grant (as per French social criteria), is also scheduled.

French private Catholic universities, notably those of Lille and Lyon, universities that offer French as a Foreign Language (FLE), and leading business schools now attract a growing number of Filipino students. However, less than 250 Filipinos chose to pursue their studies in France in 2016, which represents a figure far below the potential of our bilateral university cooperation, especially in light of the current demographic and economic growth of the Philippines. The lack of information on available courses in the two countries and the perceived language barrier are partly to blame for this situation. The French Embassy is working hard to address this through a three-pronged strategy: 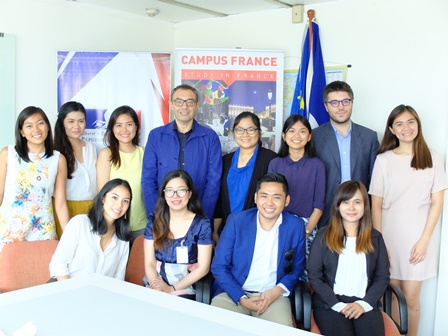 At least 10 young Filipinos received scholarships from the French government to pursue their post-graduate studies in France in fields such us management, public health, international development, public policy, and the French language

In 2017, the signing of a scholarship agreement co-financed by the French Ministry of Foreign Affairs and International Development and by the CHED, which will aim to support at least ten Filipino professors seeking to pursue post-graduate degrees in France, will mark a new chapter in university cooperation between our two countries. Our objective now is to conclude this type of agreement with Philippine government departments that could benefit from our academic offerings, particularly in the field of engineering, a sector with a promising future in terms of university cooperation.

France was once a beacon for many intellectuals and Filipino academics. Like their national hero Jose Rizal, who also took courses at the Sorbonne, these scholars studied the classics in our country. It was French values that largely helped to shape Filipino revolutionary ideals. A new horizon for France-Philippine cooperation is the promotion of student flows between our two countries. Today, it has become a major priority which will largely depend on the future of France-Philippine relations across all sectors, including of course economic and business exchange, which is why we consider it of such importance.